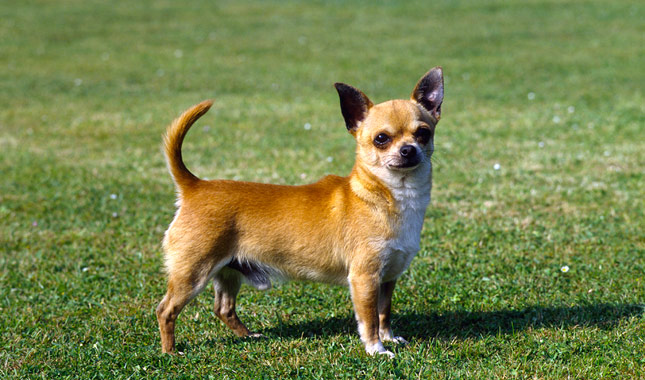 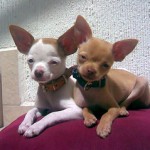 The Chihuahua is a Mexican breed that was discovered about 100 years ago. They are a toy dog that stands between 6 and 9 inches tall and they typically weigh less than 6 pounds. Their coats come in two variations, short and long. The long coat is soft and can be either straight or wavy. The short coat is soft and dense. Both coat variations can come in just about any color or color combination.

To care for this breed you will need to groom their hair daily for the long haired version, and as needed for the short hair version. This is an indoor pet that is not suited for extended periods of time outside. However, they do enjoy playing outside and going for short walks. To manage this breed’s temperament you need to socialize it and train it early. Some of the health concerns that are associated with this breed include kneecap problems, eye problems, and tracheal problems.

Chihuahuas are small dogs with BIG attitudes. Made famous by Hollywood, the Chihuahuas are now a popular dogs in the celebrity world.

The Chihuahua is the smallest breed of dog. But its spunky demeanor and personality outshines its diminutive size.

The Chihuahua’s origin in Mexico is archaeologically proven and they are believed to be descendants of the Techichi, the dogs most favored by the ancient Toltecs in Mexico.

The Techichis are pack canines and they hunt in groups. They closely resemble the modern Chihuahuas but they are larger in frame and size. Ancient civilizations in Mexico considered these dogs to be mystically endowed and they valued their existence very much.

The first Chihuahua was reputedly found in 1850 in old ruins near Casas Grandes in the Mexican state of Chihuahua from which the breed gets its name.

Chihuahuas are very small dogs but with robust build. They have distinctive facial features that almost seem fierce and aggressive.

They have two varieties in terms of coats, the common smooth-coated variety and the long-coated variety. Chihuahuas also come in different colors — solid, marked or splashed. All colors are accepted.

They are quick-moving little creatures. Graceful and sturdy in their movements, they are very proud and intelligent dogs.

They are very alert dogs and they are extremely territorial and protective. Chihuahuas can be very wary of strangers and the unfamiliarity triggers their warrior-like spirit.

They are very attached to their owners and prefer to be with them at all times. They don’t want anything more than the absolute attention of their masters. Because of this, they can be very jealous of their owners’ other relationships. Chihuahuas can be unwelcoming to their master’s friends and loved ones if it is not socialized properly.

Chihuahuas also can be aggressive to other animals especially other dogs. It can be very difficult to mix them with other pet dogs as they will battle other pets for supremacy. They want to be regarded as the favorite of their masters.

Since Chihuahuas have strong pack mentality, owners must take a leaderhip role. Chihuahuas are relatively difficult to train but they will be impossible to train if the owners don’t set clear expectations. Don’t let them develop small-dog-syndrome, a dominance related behavioral disorder.

With Chihuahuas, you must always give time to pet them and show physical affection. Attention and affection is vital for Chihuahuas’ sanity.

Although small, this breed is not for little children that are still boisterous and rowdy. When there is a child near your Chihuahua, tell the child not to tease or provoke the Chihuahua because they are easily annoyed and angered.

Socialization is very important for Chihuahuas. This will counter their fierce tendencies. You should start early to help them develop into well-mannered dogs as they mature.