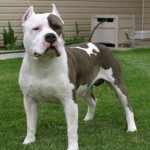 The American Pit Bull Terrier is one of the smartest, most athletic, and most affectionate dog breeds in the world. They are highly trainable and can excel at just about any training activity you give them.

During the nineteenth century, Europeans experimented by crossing bulldogs to terriers in hopes to result in a breed having the gameness of terriers and the strength and athleticism of bulldogs. They did just that and the Pit bull Terrier was developed. Unfortunately, the purpose of their breeding was to feed the desires of man to witness bloodshed and violence.

Originally, they were used in bull baiting, a brutal animal spectacle where dogs are used to submit enraged bulls. Eventually, this was banned but the fight instincts of Pit bull Terriers remain intact. When Pit bull Terriers reached America, American breeders increased its weight and gave him a more powerful head. Eventually in America, they were commonly used for dogfighting because of their high prey instinct.

They have smaller British cousins in Staffordshire Bull Terriers. Some, especially the UKC, see them as the same breeds but most disagree and asserted that the bloodlines have been separate for too long for these to be considered the same breed.

American Pit bull Terriers are strongly built, and athletic looking. They have short and smooth coats. Their eyes are round to almond shaped, and their ears are small to medium in length and can be natural or cropped. The tail is thick, medium to long, and tapers to a point.

American Pit bull Terriers are loyal and very eager to please. They are intelligent and highly trainable. In fact, they thrive in obedience contests. They are fun-loving and never aggressive to children. But most of the time, they can be overly active and they are prone to accidentally knock people down.

American Pit bull Terriers must be handled with a firmly but also with gentle sensitivity. They are hurt easily when shouted at and respond poorly when corrected without understanding. Positive reinforcement is a big piece of their training.