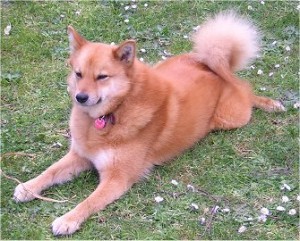 The Finnish Spitz, also called the Suomenpystykorva, the Finsk Spets, the Finnish Hunting Dog, and the Barking Bird Dog, is a Finnish breed that was developed as a hunting dog. They were traditionally used to hunt game birds like the grouse. Today they are still used as a bird dog, however, they are also used as a dedicated family pet.

The Finnish Spitz is a medium sized dog that stands between 15 and 20 inches tall and weighs between 31 and 34 pounds. They has a fluffy coat that is reddish-brown or golden in color. While temperament variations occur, this dog is usually terrific around kids and very playful. They also work well in multi-pet families. As the name Barking Bird Dog suggests, they are a very vocal dog so they are better suited as a country dog as opposed to an apartment dog.

Finnish Spitz are one of the group of small hunting Spitz breeds and as the name implies, was first bred selectively in Finland. In that country, trapped among 60,000 lakes, the Finnish Spitz developed in its own way, as other varieties of the Spitz breeds developed in their particular isolated corners of the Northern Hemisphere.

The Finnish Spitz is known as the Suomenpystykorva in Finland. It is considered the national dog in its native country. The breed has existed in northern parts of Finland and Lapland for thousands of years. This is a hunting breed of small game and birds who barks in order to bring the hunter to its location with its voice. It is courageous, faithful, and has the manners of a true gentleman. The dog makes an ideal family companion and it is especially good with children and a superior watchdog.

In 1891, the name was officially changed to Finnish Spitz, and the nickname Finkie became popular after the dog’s arrival in England in the 1920s.

Finnish Spitz dogs have a square build and a fox-like look. They are “bark pointers,” meaning they indicate where the game is by barking to attract the hunter’s attention. They’ve mostly been used to hunt small game, such as squirrels and grouse, but they’ve also hunted moose, elk, and even bear.

Aside from being popular in Finland, the breed is very popular in other Scandinavian countries as well, where it is appreciated for its beauty, intelligence and integrity.

In appearance these dogs have the typical ‘Spitz’ look, characterized by sharply pricked ears and a tail which curls over the back. The eyes should be dark and almond shaped, with a pitch black nose. The coat consists of an outer coat which can vary in color from a deep chestnut through to a pale red-gold with a soft cream colored under coat, producing a clear contrast which makes the coat appear to glow.

The Finnish Spitz is a medium sized dog. It is very agile and active and loves to be involved in all aspects of its family’s life, from hiking the back trails to watching the game stretched out on the couch on a raining afternoon.

These dogs have a strong stamina and endurance, and will fare well with a variety of activities. They are built for high performance, and will work up a strong routine in a very short period of time.

Naturally intelligent and curious, these dogs make wonderful pets for families of all ages and backgrounds. They are strong protectors, and bond well with their owners.

This breed is aware of its place in the dominance hierarchy, and owners need to clearly communicate to the dog that their place is below all humans. Finnish Spitz who believe they are higher in the order can become protective, demanding affection and attention, become domineering and can be fairly dog aggressive. Meek or passive owners will find them hard to manage.

The grooming requirements for the Finnish Spitz are relatively low, despite the fact that it can be a high seasonal shedder, which means that it is not really suited to those with allergies. You should brush the coat once a week, but this should be done more frequently during the periods when the dog is shedding more heavily.