Want to learn how to transform your Borzoi’s behavior? Click here to find out how. 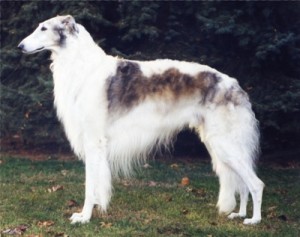 The Borzoi, also referred to as the Russian Wolfhound, is a Russian hunting and tracking dog. This breed was developed by the Russian aristocracy. It is suspected that it descends from the crossing of Collies, Greyhounds, and Lapp Sled Dogs.

The Borzoi is a majestic animal that stands between 27 and 31 inches tall. Its slender build still packs a punch with an average weight between 75 and 105 pounds. It has a flat, silky coat with medium length to long hair. It also has fringes of longer hair on the backs of its front legs, on its underbody, on its tail, and on its back legs. The Borzoi comes in a variety of solid colors and color combinations.

One of the more popular dogs in lure coursing, the Borzoi is an elegant sight hound with graceful movements and swift actions. With its long silky coat, the Borzoi is also a beautiful breed. Thus, it is also often seen in show and event rings.

Origins of the Borzoi


Arabian by origin, they were brought to Russia to hunt foxes, hares, and especially wolves — earning the name “The Russian Wolf Hound”. Borzoi was extensively used by Russian aristocrats to hunt game animals in groups.

The name Borzoi was from the Russian word “borzii” which means quick or swift.

Borzois are tall and lanky dogs. At first glance, it is very apparent that they have close resemblance to Afghan and Taigan hounds. In fact, Borzois are the typical middle Asian breed of sight hounds

Their coats are long and silky and their coats are either flat, wavy, or a bit curly. Borzoi coats should never be woolly but they can come in almost any color or color combination.

The Borzoi is streamlined for speed and grace and they have surprising strength in such a seemingly thin frame. Their jaws are very powerful too.

Borzois are very alert dogs. They have very good eyesight and they can chase down sighted game with their innate ability to move with remarkable speed and agility.

Temperament and Tendencies of the Borzoi

In general, Borzois are very quiet but alert dogs. They bark very rarely and they would make very poor guard dogs because they have weak territorial instincts. Borzois are on the aloof side but they will rarely show aggression. Borzois have a natural respect to man’s natural authority; they are not dominant by nature.

Borzois’ intelligence is not slavish but rather instinctive. They display their intelligence when out on the field, doing work. Training them with obedience commands or tricks can become very challenging because Borzois are very independent minded. Borzois are among of the least intelligent breed of dog in degree of working or obedience intelligence.

However, they are not “dumb dogs”. They just don’t respond well to human commands as compared to other breeds. Borzois are easily bored and distracted especially if training is repetitive and seemingly pointless. Nevertheless, they are clever and cunning especially when on the hunt.

Borzois thrive in agility trials and other physical events. They are naturally athletic and tirelessly energetic when out on the field.

First and foremost, Borzois are very sensitive dogs and they should never be subjected to any rough or harsh means of training. They just don’t respond well to spanking and scolding. Doing so, will only make the dog develop maladaptive behaviors and may become miserable for the rest of its life.

Always take into account that Borzois are hounds. Although they can be trained, never lose sight of the fact that they are free thinkers by nature. Don’t expect too much of your Borzoi in terms of obedience or tricks training.

Fortunately, Borzois are very immaculate breeds. They are cat-like in their cleanliness and therefore, they are very easy to house train

Borzois are elegant companions and are known to be well-behaved inside the house and energetic outside. They are not very obedient trick dogs but they are naturally docile and refined. Just give them their daily dose of exercise and your life with Borzois is enjoyable worthwhile.

Want to learn how to transform your Borzoi’s behavior? Click here to find out how.