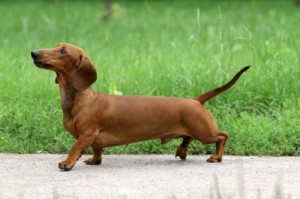 The Dachshund also referred to as a Weiner Dog, Teckel, or Zwergteckel, is a German breed that was breed for hunting badgers. Their long low bodies were perfect for burrowing for badgers and running through tunnels to flush out badgers and other pests. Today this high energy dog is used primarily as a family dog and show dog.

The Dachshund is a small hound breed with stout, short limbs. It is one of the most popular breeds today.

Dachshunds require leadership and training to become a well-adjusted, easily manageable dog. Failure to establish leadership brings the worst out in them.

Origin of the Dachshund

Some have theorized that they have been in existence since ancient Egyptian times because of the engravings and mummified corpses of Dachshund-like dogs.

However, the accepted origin of the modern Dachshunds is from Germany. They are believed to be bred in the early 1600s. They were developed to become hunters. Dachshunds hunt and track small game animals, especially badgers. Dachshund means “Badger Dog” in German.

They became popular in the United States during the 1900s but declined during the First World War. After the war, U.S. breeders rebuilt the breed by importing German stock. Eventually, Dachshunds rose to popularity once again.

Dachshunds have distinct long and low bodies which earned them the nickname “Weiner Dog”.. They have short and stout legs. Even with the cute and somewhat comical appearance they have, they are muscular and robust. Dachshunds carry themselves proudly and they have a very intelligent expression.

Dachshunds come in three different coat varieties, the smooth, wire haired, or long haired They also come in a wide variety of colors. Their sizes can either be standard or miniature.

Dachshunds are remarkable hunting companions. Their keen sense of smell make them very good trackers and they will fight any game animal to the death.

Temperament and Tendencies of a Dachshund


Dachshunds are lively and playful little creatures. They are very friendly, affectionate, and very lovable towards their family. They carry themselves very proudly and when working they are very bold and courageous. Their persistence and persevering attitude make them very valuable workers and hunters. As companions they are very devoted to their masters.

Dachshunds, being hounds, are very curious about everything. They are lead by their noses, and easily distracted by scents. They can be funny, in addition to their amusing stature. Dachshunds are clown-like and can be mischievous at times. They are very clever creatures and intuitively intelligent.

The tendency to bark can be annoying. Dachshunds are surprisingly loud barkers. Owners should make it clear that barking incessantly is an unwanted behavior. They also have an instinct to dig and sometimes chew. To avoid making these behaviors obsessive, early training and firm leadership must be implemented.

Dachshunds need training and should be started very early. Dealing with this breed needs strong leadership. Always assume the pack leader status and never let the Dachshund become dominant because they can be a major pain if they have dominance problems.

Also, do not treat them as babies. They are cute little creatures but they need to be straightened out if unwanted behaviors are developing. Do not let their cuteness get in the way of your disciplinary methods. However, never be harsh to these lovely creatures. Just be firm and consistent.

They may develop separation anxiety or become obsessive in their tendencies if they are not training properly.

Overall, Dachshunds are clever little dogs that need to be trained well. However, once trained, they are amazing house pets and valuable companions.