Want to learn how to transform your Giant Schnauzer’s behavior? Click here to find out how. 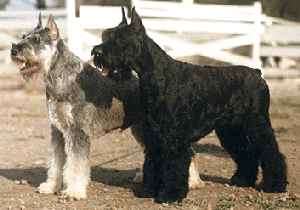 The Giant Schnauzer, also referred to as a Riesenschnauzer, is a German breed that was developed to be a cattle dog. It is suspected that this breed was created by crossing rough-coated shepherd, Bouvier des Flandres, smooth-coated drover dogs, and Great Danes. Today this breed is used as a guard dog, as a watch dog and as a family dog.

impressive breed stands between 23.5 and 27.5 inches tall and weighs between 70 and 77 pounds. Their coat is short and wiry and it comes in solid black or salt and pepper variations. This is a very loyal and protective breed that can fit into just about any type of family as long as they are socialized properly. To keep the Giant Schnauzer happy and healthy you will need to provide it with plenty of exercise and mental stimulation. Giant Schnauzers are actually not gigantic dogs as suggested by their name, but simply a larger and more powerful version of the Standard Schnauzer.

They will only reach the heights of 28 inches for males and 26 inches for females. Giant Schnauzers that go beyond 80 pounds are considered overweight.

Origin of the Giant Schnauzer


The breed was developed in the Wurttemberg and Bavarian sections of Germany. These places were agricultural areas. Dogs like the Giant Schnauzers are in high demand as farm workers that help in variety of tasks. They were used as livestock controllers and they aid shepherds with driving livestock to market. They were also used as guard dogs

Giant Schnauzers are practically enlarged standard schnauzers. In general appearance, they should resemble their smaller relatives. They are robust, strongly built, nearly square in proportion of body length to height at withers, active, sturdy, and well muscled.

They have a rugged build with a dense weather resistant coat that is wiry. They are powerful dogs and are very useful as working breeds. Giant Schnauzers are versatile and very intelligent. Their high train-ability makes them useful for police work as well.

The Giant Schnauzers coat, distinctive beard and eyebrows are its trademark appearance. The breed is accepted in solid black or salt and pepper.

They have free, balanced and vigorous gaits, with good reach in the forequarters and good driving power in the hindquarters. When moving at a fast trot, a properly built dog will have a strong, firm, and flat gait.

Temperament and Tendencies of the Giant Schnauzer


Giant Schnauzers are active and always in high spirits. They are extremely intelligent and have reliable temperaments. This breed loves to work and it naturally wants a job to do.

They have strong territorial; instincts which makes them very good watchdogs. The Giant Schnauzer loves his owners and feels great responsibility to protect them. Fortunately, its remarkable intelligence makes it learns quickly to distinguish between friend and foe.

Giant Schnauzers are bold and valiant creatures. They are courageous and enduring. They have profound alertness with intelligence and reliability. However, they are genuinely composed and deeply loyal to family. They can be amiable and playful with people they are comfortable with. But they are very commanding creatures when aroused.

The objective in training this dog is to achieve the alpha dog status. It is a natural instinct for a dog to have an order in their pack. When we humans live with dogs, we become their pack. The entire pack works together under a single leader. As an owner, always assume the top position to manage and control your Giant Schnauzers behavior.

This breed must be socialized early and extensively to prevent the strong territorial instincts and to keep them from becoming hostile.

Giant Schnauzers need a lot of exercise, requiring daily walks, playtime with another dog or romps in the yard.

The breed requires regular grooming, including brushing and stripping. Giant Schnauzers’ owners should be prepared to spend time maintaining the breed’s coat.

Want to learn how to transform your Giant Schnauzer’s behavior? Click here to find out how.