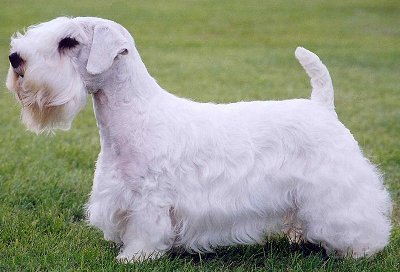 Want to learn how to transform your Sealyham Terrier’s behavior? Click here to find out how. 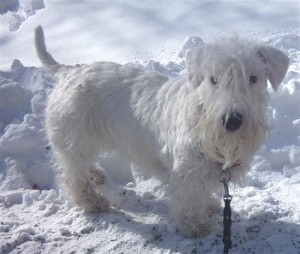 The Sealyham Terrier, is a terrier breed that originated in Wales. This breed most likely developed from crossing the Cheshire Terrier, the Welsh Corgi, the Dandi Dinmont Terrie, the West Highland Terrier and the Fox Terrier. It is a small dog that only stands about 12 inches high and it weigh between 18 and 20 pounds. They have a coat similar to the Scottish Terrier, however, their coat colors are slightly different. The Sealyham Terrier comes in shades of white, lemon, blue, badger pied, black, and brown.

The Sealyham Terrier, a breed distinguished for winning the Westminster’s Best in Show four times, comes from the Terrier Group.

There is some evidence of a small, white dog resembling the Sealyham terrier that was imported into Wales in the 15th century; however it has not been officially connected with the origin of the breed. The Sealyham Terrier is a native Welsh breed that was created through the efforts of Captain John Tucker Edwardes of the Sealyham Estate, from which the breed takes its name, in Pembroke shire West Wales in the mid 1800’s.

They were bred to hunt otters, rodents, skunks, and badgers. The breed comes from a mixture of the Welsh Corgi, Dandie Dinmont Terrier, Fox Terrier, West Highland White Terrier and the Basset Hound. This breed was recognized by the AKC in 1911 and AKC approved in 1974.

The Sealyham Terrier is a free-moving, active, balanced dog. It has great substance in small body. Its general outline is oblong, not square. It can be considered as a “big dog with short legs” since the breed is built low to the ground, but with a robust body, heavy bone, and a strong temperament.

The Sealyham Terrier has a hard, wiry outer coat with a soft, dense undercoat. They can come in a variety of colors including white, tan, and lemon. These terriers require clipping and trimming every few months, to keep their coat short and free of mats. But don’t expect your dog to look like the show dogs you’ve seen in books or on TV. That particular look takes hours of work by experienced show groomers.

A determined, alert, and willful small dog they are independent and undemanding. These dogs can be very strong headed and stubborn making training something of a challenge. The breed is best suited to a confident and assertive owner with some experience in dog ownership.

The Sealyham has a very distinctive personality, and they are known for their courage and excellent watch dog characteristics. This breed has been described as “the most beautiful union between cheerfulness and courage” because of its loyal and affectionate nature. This dog likes to bark but is some what reserved with strangers.

This breed does well in an apartment as they do not require a lot of exercise. They are barkers and diggers so keep that in mind when building an outdoor enclosure. Sealyham Terriers are playful and fun, but not overly hyperactive. Although they are sometimes aggressive toward other dogs, they usually get along with fellow pets.

The breed can easily live in an apartment or house because they require little exercise and do not need a yard. The breed is good for elderly people because they are fairly calm and inactive. The breed prefers cooler weather but can live in any climate.

The life expectancy of this breed is around 12-15 years. There are a number of health problems to look out for with this breed, and this includes spinal problems, PRA, deafness, heart problems, cataracts, and glaucoma.

Want to learn how to transform your Sealyham Terrier’s behavior? Click here to find out how.