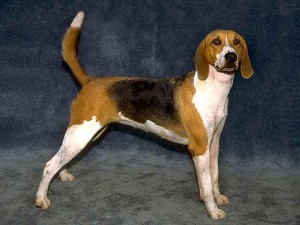 The Harrier is a medium sized dog that stands between 19 and 22 inches tall and weighs between 48 and 60 pounds. They have a short, hard coat that is tricolor white, black, and tan. However, this breed can be found in any colors that are normally associated with hounds. This breed is not a great breed for small children or young kids. They fit in better with families who have older kids. They get along with other dogs, however, they are not particularly friendly with cats.

Origin of the Harrier


The earliest records of the Harrier breed date back to the 13th Century as the first pack was introduced by Sir Elias de Midhope. However, they are believed to have existed before that date. This is based on 400 BC Greek writings; where a similar hare hunting breed is mentioned

The original bloodline of the breed is somewhat difficult to determine and sources have widely conflicting stories about the origins of this breed. Some have said that Harriers were crosses of Bloodhounds, Talbot Hounds, and Basset Hounds; some think of them as crosses of the English Foxhound, Fox Terrier, and Greyhound; still others consider that the Harrier is just a bred-down version of the English Foxhound.

Harriers were primarily developed to hunt hares, as the name suggest. The breed has also been used in fox hunting though. The United States has used Harriers for hunting since the colonial era but they are still considerably rare in the US.

The Harrier resembles an English Fox Hound but smaller. They are medium sized dog that stands at 21 inches at the withers and they weigh around 53 lbs. They may also look like a Beagle but significantly larger. They have mellow and gentle expressions when relaxed and alert when aroused.

Harriers are muscular hunting dogs with large bones. They have remarkable stamina and strength. They are solidly built, full of strength and quality.

Harriers have short, hard coats that come in a variety of color patterns. The coats should appear dense and glossy. The ears are large and hanging, set on low and lie close to the cheeks, and they are rounded at the tips.

They are tireless when working. Harriers have great noses and they excel in tracking and agility. They have slower paces when it comes to tracking which works well for people who want to follow it on foot. Harriers prefer to track in packs.

Temperament and Tendencies of the Harrier


Since Harriers are pack dogs, they get along well with other animals. They are naturally outgoing and friendly. They love human companionship and may always want to be with their owners. Harriers are extremely people-oriented and they are very eager to please.

Harriers are very intelligent dogs but they are distracted often by their noses which could catch any scent. They are curious dogs and they tend to become willful when scents are caught. Harriers are not aggressive and they are great for children.

Harriers should be given daily exercises to keep them fit and mentally stable. Lack of exercise can make Harriers destructive. They will seek ways to vent out their energy. Some Harriers may require more exercise to expend excess energy. They are not recommended for apartment life. They are moderately active indoors and do best with large yards.

A fenced yard is essential because Harriers will follow their noses at all costs. To train this breed effectively, owners should have persistence and firmness. Implement positive reinforcement. Reinforce pleasant behavior while acting indifferent to unwanted behaviors.

The Harrier is an average shedder. Grooming them is quite easy. Brushing and combing dead hair should be done occasionally to deal with shedding.