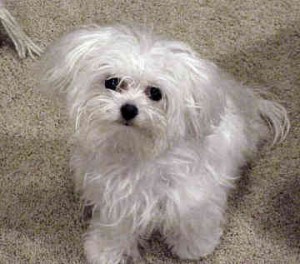 The Maltese is a toy breed that originated in Malta. This is an ancient breed that can be traced back to 1500 B.C. Today this is a popular breed for dog shows and families, as well as companions for the elderly. They are often found of the laps of their owners. The Maltese can be described at times as a ‘yappy’ dog and are known for alerting their owners to all sorts of sounds. Starting training at a young age is recommended.

The Maltese usually stands about 10 inches tall and weighs between 4 and 6 pounds. They have a long, silky white coat that may have faint lemon markings. This is a friendly dog, but they do not always get along well with kids or other pets. They are a dog bred for royalty and they know it. Be firm but fair when training a Maltese.

The Maltese is an ancient dog that was once described as a dog that belongs to the “Melita” the archaic name for Malta or could be an ancient town in Sicily. Its exact origin is unknown and there are a lot of accounts about its supposed history.

The Maltese is believed to have descended from a Spitz type dog found among the Swiss Lake dwellers and bred down to its small size. Although there are also some claims that the breed originated in Asia and is related to the Tibetan Terrier.

The Maltese has royalty written all over its roots. It has been an aristocrat for over 28 centuries. The breed was owned by sovereigns all over the world. The breed became particularly popular with women in royalty, who often carried them in their sleeves and even to their beds.

The Roman Governor of Malta, Publius, cherished his Maltese so highly that he commissioned a portrait of his pet Maltese, Issa. He even had poetry written about the breed.

Appearance and Abilities of the Maltese


The Maltese is a breed in the toy group of dogs. It is covered with a blanket of long, silky white hair. It is a small dog weighing only up to 7 lbs and can reach 10 inches at the withers. Despite his size, it possesses the vigor needed for the satisfactory companion.

Their bodies are compact. The length of the body should be equal its height. Considering its small size, the Maltese moves with a jaunty, smooth, flowing gait.

The Maltese is a single-coated breed. The coat hangs long, flat, and silky and may touch the ground from the sides. The long head-hair may be tied up in a topknot or it may be left hanging. The coat color should be pure white.

The Maltese is courageous despite its diminutive size and adorable appearance. Its gentleness and affectionate nature make it endearing to its owners. Malteses are very playful and lively. Children just love their vigorous and hardy characteristics.

They somehow manage to keep clean even in most undesirable circumstances. The Maltese is graceful and refined in its actions. Its friendliness makes it a great companion. It can also mix with other animals with no problem.

The Maltese is a very devoted pet. It is affectionate and loving to its family. The Maltese is also a very alert breed. It can announce arrival of strangers making it a great little watchdog.

It loves the outdoors and may tend to chase and jump when excited.

Training and Care of the Maltese


With high intelligence, the Maltese thrive in obedience commands and performing tricks. Train the Maltese with positive reinforcement but be firm and consistent showing strong pack leadership. Never over-pamper this breed; they may develop “small-dog syndrome” which is a very undesirable behavioral problem.

The Maltese may require daily walks and occasional play time to stimulate it physically and help vent out its building energy. Even when mature, the Maltese stays playful and child-like. It likes to play with its masters and they are eager to impress people with tricks.

The Maltese requires consistent and vigilant grooming. Daily combing and brushing of the long coat is important but be gentle, as the coat is very soft. The hair on the top of the head is often tied up in a topknot to keep it away from the eyes. Bath or dry shampoo regularly, making sure it is thoroughly clean.