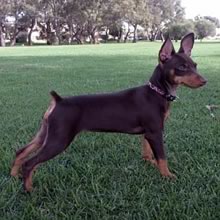 The Miniature Pinscher, also called the Reh Pinscher, the Zwergpinscher, Min Pin, and the Mini Pin, is a German breed. They belong to the toy group and it is suspected that they descended from a crossing of the German Pinscher, the Dachshund, and the Italian Greyhound, they are not actually a smaller version of the Doberman Pinscher as some people believe. This breed was developed as a ratter and as a watchdog. Today this little dog is used mostly as a family pet but still takes his job as a watchdog seriously.

The Miniature Pinscher stands between 10 and 12 inches tall and weighs between 8 and 10 pounds. Their coat is short, hard and smooth. They come in three basic coat colors, black, chocolate, and blue. This dog is best suited for families with older kids, as they don’t like to be pestered and rough housed with. They also get along well with other pets. Some of the health concerns that this breed has include eye problems and patella luxation.

This breed is prone to dominance so it is important that owners take a firm and consistent approach to training in order to avoid such problems as marking, excessive barking, and aggression.

History and Origin of the Mini Pinscher

The miniature pinscher resembles the Doberman pinscher but in fact is of quite different legacy. The Miniature Pinscher originates in Germany, and was originally bred for hunting rats and vermin, as well as keeping guard. It is believed that the Miniature Pinscher evolved from the ancient German Pinscher family of dogs, which ultimately produced a number of the breeds recognized by the American Kennel Club today.

Known as the “King of the Toys”, the Miniature Pinscher is a tiny, compact, muscularly-built, sleek dog with square proportions and well-chiseled lines. They may be small and delicate-looking little dogs but they have constitutions of steel and a mischievous character.

They appear naturally well-groomed and self-possessed. The Miniature Pinscher is a smooth-coated dog with coat colors that include red, stag red (red with black hairs), black with rust markings, or chocolate with tan.

This perky little dog has a particularly distinctive gait, found in no other breed. It has a hackney gait like the one found in carriage horses.

Temperament and Tendencies of the Mini Pinscher

The Miniature Pinscher is an alert and fun loving dog, with courage, spirit, and enthusiasm for everything he does. Alert, spirited and fearless, they can be willful and too independent. This dog is small, but he doesn’t know it; valiantly challenging intruders with their bold, insistent bark.

You will find this breed to be fearless, animated, intensely curious and always full of vim and vigor. They are also great escape artists; mischief and fun is their specialty. They are great with children as long as they are raised around children who treat them in a gentle way and are taught responsible dog ownership

It should be noted that this is not a beginner’s breed. For a small dog, it is quite a handful.

Socialize your miniature pinscher at an early age. This dog does not do well with younger children, as it plays very rough. Children should be careful not to annoy this breed. Also, miniature pinschers can be hostile with other dogs if not socialized well.

Do not let this sweet little dog develop the Small Dog Syndrome. That is when problems start to arise. They will become demanding, headstrong and will begin to bark excessively. Do not allow them to become tyrants by showing natural authority over them. Owners should always assume pack leadership.

The Miniature Pinscher’s smooth, short-haired, rigid coat is easy to groom. You should comb, brush and shampoo only when necessary. Loose hair can be removed by wiping over with a warm, damp washcloth.