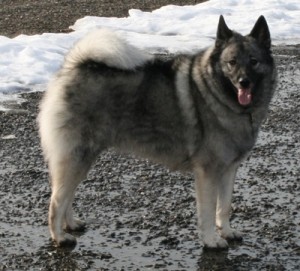 The Norwegian Elkhound, also called the Elkhound or the Norsk Elghund, is a Norwegian breed that was probably developed by the Vikings. They belong to the hound group and they were originally used as watchdogs and guard dogs. They were also used to hunt large game animals like bears and elk. Today this 6000 year old breed is used as a pet.

The Norwegian Elkhound is a medium sized dog that stands between 19 and 21 inches tall and weighs between 44 and 50 pounds. Their coat sheds year round, but they don’t have the characteristic doggy smell. Their coats should be variegated with gray, white, and black, and they should have black masking on their faces and have black overlays on their backs and near their tails.

History and Origin of the Norwegian Elkhound


The Norwegian Elkhound is an arctic breed with many wolf like characteristics. Its origins in Norway go back more than 5,000 years, where it was used as an all-purpose hunter, shepherd, guard, and companion. Mainly bred for hunting, it is a solid, sturdy hunter of elk, bear and other wild animals.

The breed was not shown until 1877, when the Norwegian Hunters’ Association held its first show.

The breed has a large round and long rectangular muzzle. They have two small round eyes that are bright and full of expression. The Norwegian elkhound is a compact hound breed. It is medium-sized and spitz-like, with a wolfish face, prick ears, thick coat, and curled tail.

Its thick, close-lying, gray coat is composed of a soft, woolly undercoat and a coarse outer coat Its coat is short and even on the head, ears, and front of legs; and longest on the back of neck, buttocks and underside of tail.

In locations with subzero temperatures with snowy terrains of thick forests, and rugged mountains, only the hardiest of the breeds could perform the variety of jobs at which the Elkhound excels.

Temperament and Tendencies of the Norwegian Elkhound


The Norwegian Elkhound is a fearless but gentle dog. It has a temperament that is dignified, independent and generally, friendly. Although it may be somewhat reserved with strangers, it will greet family and friends it knows with enthusiasm. This breed commonly works with other dogs as long as they are socialized early on.

The Elkhound is a very people-oriented breed and does not like to be shut away from its family. Norwegian Elkhounds are loyal to their “pack” and make excellent family dogs if given proper attention but they may develop social problems if they feel neglected.

It is capable and confident, a bold, self-assured dog with a strong presence. Its keen senses and watchful attitude, makes a dependable alarm dog. Though, one problem this breed has is that it can bark excessively.Norwegian Elkhound

The Norwegian Elkhound must understand that you are in control of the training and the situation. Some Elkhounds are quite sensitive when it comes to training. Keep in mind they were bred to work independently from the hunter and find their prey in the forests of Norway. They are strong-willed and have a mind of their own, requiring a confident owners that can take charge

It is imperative to be firm with this dog; owners should display good pack leadership. Puppies should be socialized early and expensively and need firm but gentle discipline.

They call for vigorous exercise. Without enough mental and or physical exercise they can become high strung. When walking this breed, you should make the dog heel beside or behind you, never in front, to reinforce the human is alpha over the dog.

Elkhounds require regular everyday brushing especially when they molt to avoid their oil glands becoming plugged and to help them stay cool in summer.