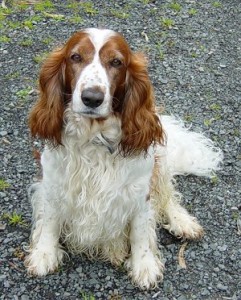 The Welsh Springer Spaniel is a sporting dog that originated in Wales. They are a medium sized dog that stands between 18 and 19 inches and that weigh between 35 and 45 pounds. They have a straight silky coat that is red and white. Freckling on the muzzle is also possible and common. Like other spaniels they are friendly, active, and generally loving. They make a great family dog.

The breed came from Wales and was bred originally for bird tracking and retrieving. It is also possible that crosses of the Welsh Sheepdog and the Corgi were conducted.

Although the breed was fashionable with the nobility in the 1700s, the English Springer Spaniel soon replaced it in popularity. A small group of breeders kept the breed from going extinct.

It belongs to the gun dog group and is used for working, as a companion and seen in the show ring. The Welsh Springer Spaniel was first Registered by the AKC (American Kennel Club) in 1914.

It is easily identified by its rich red and white coat and comparatively small ears. The coat is normally straight thick & silky.

They are highly intelligent dogs that are easily trained; the Welsh Springers are outstanding obedience dogs and superb working gun dogs With its excellent nose and slightly webbed feet, the breed is a versatile hunter, water dog, and retriever.

Temperament and tendencies of the Welsh Springer Spaniel


The Welsh Springer Spaniel is a strong merry, active spaniel. They are gentle and excellent with children. They get along with other pets. The breed is friendly to humans and animals alike. In spite of this, they make excellent watchdogs, alerting you to strangers and strange noises.

The breed is happy and willing. It is somewhat independent, but also sensitive and reserved with strangers. It possesses an even disposition. The Welsh Springer Spaniel prefers to be with its people. They have an innate desire to be part of a family.

The Welsh Springer Spaniel has tremendous endurance for work and play and they love to play on the field or in the pool with its owners.

Socialize this dog well to avoid timidity. Like all dogs, this breed requires a consistent leader that always takes the role of the alpha dog. Training is imperative and should be done daily. The breed thrives in exercise and training.

Brush the outer coat using a slicker brush and steel combs. The dog has a double coat, comprised of a long, wavy outer coat and a soft and dense undercoat. The coat should be shiny and have a good deal of feathering if you’ve groomed it properly.