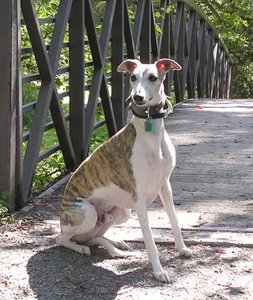 The Whippet is a British breed that was created by crossing the Greyhound with a variety of terrier breeds. This dog was originally used as a mouser and vermin hunter, however, they also made a living at the dog races. Today this dog is used for both hunting and as a companion.

The Whippet is hound dog that stands between 17 and 20 inches tall and weighs about 28 pounds. They have a short, fine coat that comes in a variety of colors and patterns. When you look at this dog they look just like a miniature Greyhound.

The Whippet can be a very sensitive breed. It is very important to be fair and patient when obedience training your Whippet so as to not stress them too much.

Whippets are built for speed that they are considered the poor man’s horse. Their agility and dexterity is superb but it is their gentle and affectionate nature that make them so endearing household companions.

Origin of the Whippet


The Whippet is a breed of dog, of the sight hound family. It has evolved for over a hundred years but it was only officially recognized by the English Kennel Club at the end of the 19th century.

People made use of Whippets for racing. They were used as an entertaining form of gambling.

The Whippet is medium-sized dog. Its appearance shows great elegance and fitness. It also denotes speed, power, and balance. Athleticism is apparent.

Whippets weigh around 25 to 40 lbs with heights up to 20 inches. They have short, smooth, and close-lying coats that are firm in texture. Their coats can come in any color and marking pattern. Color is considered immaterial.

The Whippet is an outstanding track racer over short distances reaching speeds of up to 37 miles per hour, 60km. per hour, in seconds. Its gait is low, free moving and smooth, with reach in the forequarters and strong drive in the hindquarters. It is an efficient runner and able to cover a great amount of distance in a single motion.

Whippets have high energy when in the field. They are hardy and tough.

Temperament and tendencies of the Whippet

Lively, affectionate, and docile, Whippets are great companions. They are extremely devoted and naturally quiet and calm when at home. They are so gentle and they are great with young children. Whippets are never aggressive and very friendly and can be used as therapy dogs.

However, their instinct to chase small animals like cats is strong. Their strong prey drives kicks in quite compellingly with the presence of small animals and Whippets might kill them if caught. It can be remedied if socialized with small animals extensively and early.

In contrast to small animals, Whippets are well adapted to live with other canines.

Whippets desire companionship. They are most at home when they are beside their owners. They are amiable and very friendly even to strangers. Whippets do not make good watchdogs. They may bark sometimes to announce the arrival of strangers but don’t count on them to do it too often. They are just too welcoming to become guard dogs.

Training Whippets must include a lot of variety because they easily bore with repetitive training. Agility training is essential for Whippets. They like to mix mental stimulation with their physical exercises and they need it regularly.

Housebreaking Whippets differ from dog to dog. Some can be trained very easily others can be tricky. Just be consistent and follow the basic methods for house training

Whippets must be trained with consistency and gentleness but they are quite sensitive to scolding. Owners should never be harsh to them. Use only positive reinforcement. Always be a pack leader and don’t let Whippets develop small dog syndrome.

Whippets’ smooth, fine, short-haired coat is easy to groom. A regular rub all over with a damp chamois will keep the coat gleaming. Brush with a firm bristle brush, and bathe only when necessary. They do not usually produce odor and they are average shedders.

The Whippet first appeared in the Northern section of England in the 19th century. This mid-sized dog has the appearance of a greyhound and carries the speed that surpasses many of the other breeds in the hound group. Known as the poor man’s race horse because of the many competitions to showcase their speed they were recognized by the AKC in 1888 and has become a popular show dog that has won many championships in various categories.

Whippets are gentle dogs that are very loving, and enjoy getting and giving affection. The breed is calm and sweet and very rarely even barks. They will bark when they need to, but they do not make good watchdogs though. They can get snappish at times so they are not recommended for your kids. They are friendly enough though to be used around the elderly in nursing homes.

If they are not raised around cats they will chase them, often reaching speeds of up to 35 miles per hour. Both male and female Whippets are equally easy to housebreak. They are very loyal to their owners and love to be with them. They will stay close when they can. Whippets are quiet enough for even apartments.

The whippet is one of the few breeds that can remain extremely healthy if it receives the proper nutrition and grooming. This breed often lives over 15 years without health issues or problems. Some health issues that may cause concern would be genetic eye problems or heart disease, both easily avoidable if the dogs is pure breed. Undecended testicles are one problem the Whippets can commonly have.

Many of the health issues and obstacles that are faced by owners is due to the mixed breeding of t his dog. Owners are cautioned and encouraged to find as much history as possible on their family friend. Being able to provide this information to a trusted pet professional is critical when considering any health scares.

The whippet is a low maintenance dog and requires bathing only once a month and brushing to rid its coat of dead hair. The whippet is a short haired breed and does not require frequent bathing because it strips away the natural oils within the coat. Keeping the Whippet’s nails clipped is a major concern that each owner should take into account when purchasing this breed.