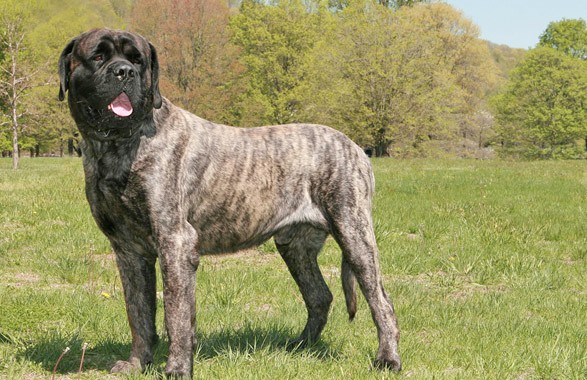 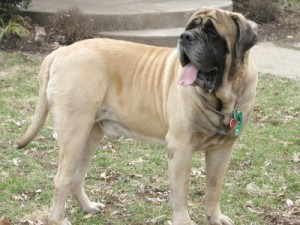 The Mastiff, also referred to as the English Mastiff, is a large working breed that originated in Great Britain. This breed descended from large breeds prized by the Babylonians 4000 years ago. Stories about this breed’s ancestors have been found on Egyptian monuments and mentioned in historical pieces of literature. Today this dog is still used as a watch dog and guard dog, however, they are also used as hunting dogs and family pets.

While their large size may be intimidating to some pet owners, the Mastiff is a loyal and gentle animal to its family. They even get along with kids. However, they are very aggressive towards strangers and they are usually dog and food aggressive. In order to produce a loving and safe animal fit for family life they need early human and animal socialization as well as obedience training.

The Mastiff is one of the largest breeds of dog. It has immense strength and remarkable courage. It will fiercely protect its owners. The Mastiff is also very affectionate and well-mannered giant and they make dependable and loving companions.

In ancient Egypt, creatures resembling typical Mastiffs were already depicted in monuments. Mastiffs even fought alongside British soldiers in 55 BC. Julius Caesar was impressed by the its courage and ferocity, they were brought to Rome to take part in gladiatorial savagery.

Later, the Mastiff became popular with the peasants in England, where they became watchdogs to keep wolves and other dangerous predators under control as well to as protect the home.

Appearance and Abilities of the Mastiff


The Mastiff is an extremely huge dog. In terms of mass, it is considered to be the largest breed of dog. Weight can reach up to 250 lbs in males and 200 lbs for females. The Mastiff epitomizes power and strength.

Mastiffs are very muscular and they stand with grandness and dignity. Long ago, they were described in this analogy: “As a lion is to a cat, so is a mastiff compared to a dog.”

Mastiffs have close-lying, fine, short, and smooth coats which come in colors of apricot-fawn, silver-fawn, fawn, or dark fawn-brindle.

Mastiffs are born to guard and protect.

Mastiffs are watchful and alert dogs. They are courageous and very loyal to their masters. Their massive size can be daunting but they are gentle giants and known to be affectionate and warm to their human companions. They are docile and good natured inside the house.

Mastiffs are very gentle even to small children. However, it is still not recommended to leave them with small kids because of their monstrous size. They are fairly inactive indoors as long as they get their daily exercise.

They have excellent guarding instincts but rarely bark. Naturally, they have the instinct to protect territory and their owners. Mastiffs would rather keep watch of the strangers, keeping them at bay. They won’t attack because they are naturally not aggressive breeds but Mastiffs will act decisively if the threat is apparent. Though Mastiffs’ temperament vary widely, they lean towards the welcoming side.

Mastiffs tend to drool a lot. They also wheeze and snore loudly.

Training and Care for the Mastiff


Mastiffs are eager to please and they need constant human leadership. They also need to be socialized extensively so they grow to become well-mannered adults.

They can be a bit dominant. A firm and consistent leadership is the key to manage and train them. Never resort to harsh methods of training. Be gentle and give positive reinforcements. Their sizes will become a very big problem if Mastiffs develop dominance-related maladaptive behavior.

Apartment living is just fine for Mastiffs but they should get daily walks and playtime. Regular physical and mental stimulation releases all the surplus energy that may build up inside the house.

Like most large dogs, the Mastiff is prone to bloating. Scatter their meals all throughout the day; about 2 to 3 relatively small meals a day.

Mastiffs are average shedders and they are easy to groom. Bathe or dry shampoo when necessary.