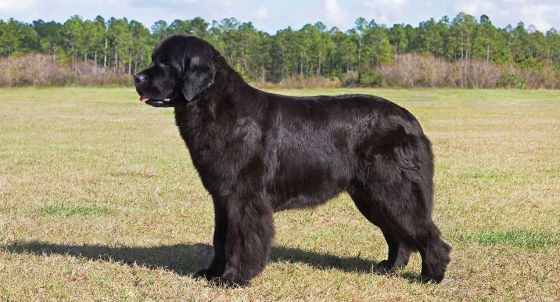 Want to learn how to transform your Newfoundland’s behavior? Click here to find out how.

The Newfoundland is a Canadian breed that belongs to the working class of dogs. It is suspected that this breed descends from large dog breeds like the Great Pyranees and the Tibetan Mastiff. This breed was originally used to pull sleds, guard villages and camps, and to hunt. Today they are used as a family dog and as a watch dog. They are also used as water rescue dogs as they are natural swimmers and are able to pull victims from the water with their powerful swimming stroke.

The Newfoundland is a large dog that stands between 26 and 28 inches tall and weighs between 110 and 150 pounds. They have a double coat that is oily and water resistant. This is a very laid back breed that loves kids and other animals.

The Newfoundland is a very trainable dog. Because of their size, though, they should begin training at an early age.

breed began in Newfoundland and was bred from dogs indigenous to the land that soon became known as St. John’s Dog. The theory is that they may have descended from the big black bear dogs established by the Vikings in 1001A.D. but that’s more of a legend than actual fact. It’s more likely that their size results from the introduction of big mastiffs, brought to the island by many generations of Portuguese fishermen, who had been fishing the Grand Banks of Newfoundland since the 1400’s.

Born as a canine seaman, the Newfoundland dogs, also called Newfs, were a standard piece of equipment on every fishing boat in Canada’s maritime province that gave the breed its name.

Fishing has always been Newfoundland’s chief industry; the dogs hauled fishing nets out to sea and back to the boat and retrieved objects or people who fell into the sea. Equally at home in water or on land, the Newfoundland was large enough to pull in a drowning man or to break the ice as the dog dove into the frigid northern ocean. The breeds large lung capacity allows them to swim great distances and fight heavy ocean currents.

A large dog and a true workhorse, the Newfoundland is a master at long-distance swimming and has true lifesaving instincts in the water. They large and strong, possessing a heavy coat to protect them from icy waters. Equally at home in the water and on land, today’s Newfoundland competes in conformation, obedience, agility, tracking, draft and water tests, and carting. The breeds coat can be black, brown, gray, or white and black.

This gentle giant is quite content to relax around the house, but they still need to be taken on a daily walk. While out on the walk the dog must be made to heel beside or behind the person holding the lead, as in a dog’s mind, the leader leads the way. You need to make sure the dog knows that the human is the leader. This breed enjoys having frequent opportunities to swim and frolic.

Obedience training is an absolute must for a Newf. Due to his size and strength, they must be under control at all times. Do not wait until your Newfoundland is fully grown to begin training. Even a 6 month old (potentially 75 pound) puppy can outrun you, pull you down, knock you flat, jump up and give you a bloody nose. Newfs respond very well to training as they like to please and enjoy the companionship that comes with training.

The breed enjoys being outdoors especially if it is cool. Hot weather is hard on Newfs so make sure to provide plenty of shade and cool water. Do not leave the dog outside alone for hours on end they prefer to be with their families.

They shed heavily twice a year and moderately the rest of the year. They must be brushed at least weekly, but it is better to brush them about every three days. Their coats mat easily. They are fairly heavy shedders. Do not bathe unless absolutely necessary as that strips the coat’s oils.

Because of their size, a professional groomer may be helpful in spring and fall.


Want to learn how to transform your Newfoundland’s behavior? Click here to find out how.