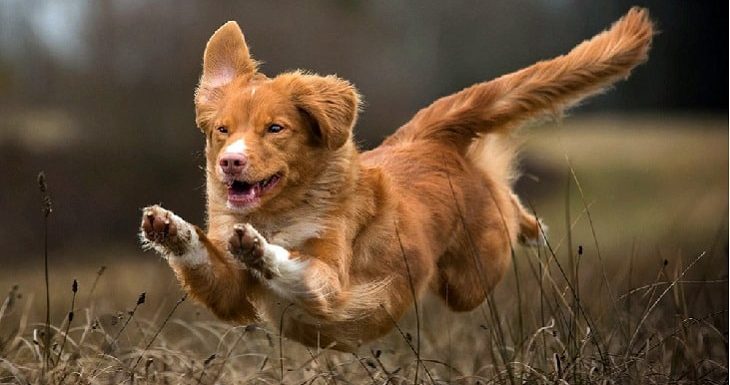 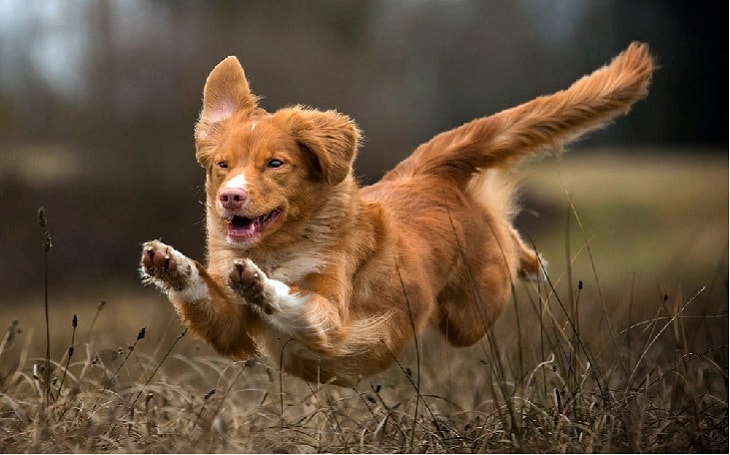 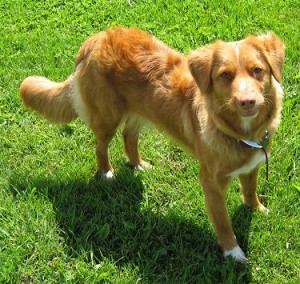 The Nova Scotia Duck Tolling Retriever, is a Canadian breed that belongs to the gundog class. They stand between 17 and 21 inches tall and usually weigh between 37 and 51 pounds. They have a medium to long length coat that is thick and wavy. Their coats are red fox with markings on their faces, feet, chests, and on the tips of their tails. This is a great family dog as they are patient and playful.

The ancestors of the Nova Scotia Duck Tolling Retriever of today have been an officially recorded breed since at least the 1890’s. The breed was developed in the early 19th century to retrieve waterfowl.

The breed originated on the eastern coast of Canada where there are millions of acres of wide open spaces and a suitable environment of coastal estuaries with large undisturbed water fowl habitats.

The Toller acts as a decoy; it lures the ducks within gunshot range by being playful along the shoreline. Then the dog is sent out to retrieve the dead or wounded birds.

The Nova Scotia Duck Tolling Retriever is a member of the gun dog group. They were originally used for flushing waterfowl and retrieving game; today they are used as gun dogs and as companions.

The Nova Scotia Duck Tolling Retriever has a close resemblance to a Golden Retriever only significantly smaller in size. It is a medium-sized, powerful, compact, balanced, well-muscled dog, medium to heavy in bone, with a high degree of agility, alertness and determination.

It has a straight, repellent, double coat of medium length and softness with a softer, dense undercoat. Also, it has a heavily feathered tail that is constantly wagging with excitement. Its gait and movement gives an impression of power. It’s step is springy, jaunty and displays good reach of forelegs and strong rear drive; parallel movement fore and aft. The breed is extremely athletic.

The coat color comes in various shades of red or orange with lighter colored featherings.

The breed is an excellent swimmer and is well-suited for retrieving water fowls.

The Nova Scotia Duck Tolling Retriever is always in high spirits. It is a very lively breed that loves the outdoors very much. It is an intelligent dog, which gets along well with children. They are sensible and very devoted to their families.

Although quite similar in appearance to the Golden Retrievers, Tollers have an independent mind of their own and are not pushovers to raise and train. A trait rarely found in Golden retrievers.

They are hard-working and clever, and enjoy being with their masters. Sometimes, its expression may seem low-spirited, but once in the fields to hunt, they become animated and happy hunters.

Training and Care of the Nova Scotia Duck Tolling Retriever


Nova Scotia Duck Tolling Retrievers must have regular opportunities to vent their energy and do interesting things. Otherwise they will become rambunctious and bored which they usually express by becoming destructive. Bored Tollers can make a shambles of your house and yard.

They are ideally suited to the active, country dwelling family. They should be socialized from an early age. Dealing with this breed needs a sensitive but firm leadership. The Tollers can be quite independent. Owners must always assume the pack leader status to manage and train them effectively.

Their water-repellent, double coat should be combed and brushed with a firm bristle brush, paying particular attention to the dense undercoat. Dry shampoo regularly, but bathe only when necessary because it removes the natural oils in the skin which make it naturally water resistant.