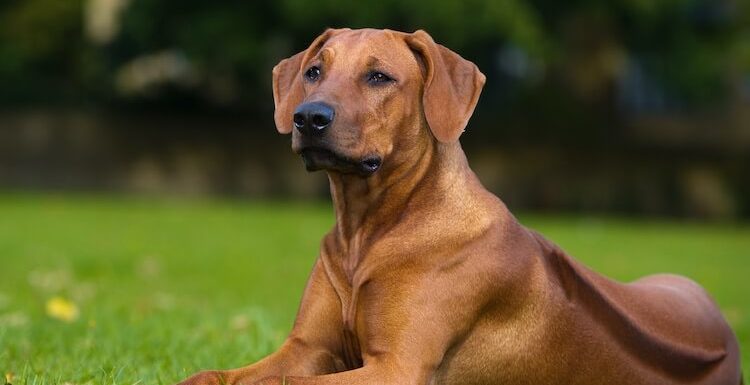 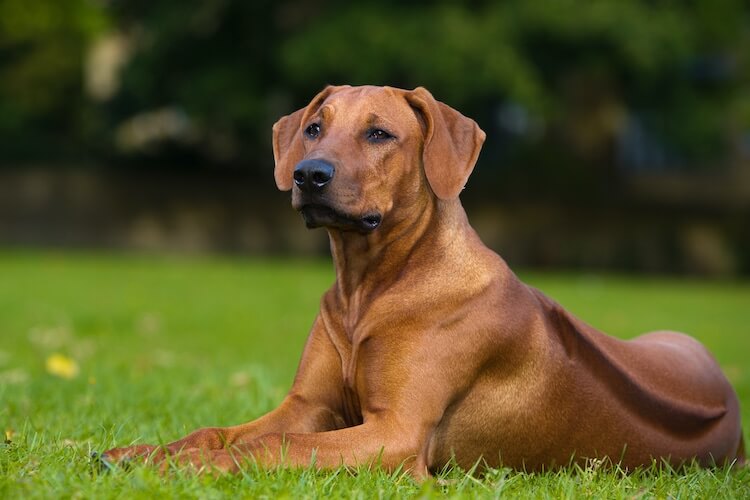 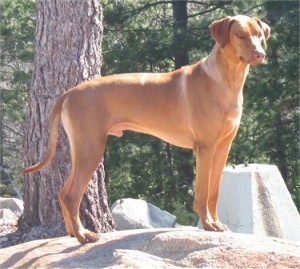 The Rhodesian Ridgeback, also called the African Lion Hound, is an African breed that developed in Zimbabwe. This breed was originally used to hunt lions. Today they are used for hunting as well as for companionship. They are a good sized dog that stands between 24 and 27 inches tall and they weigh between 65 and 85 pounds. They have a short glossy coat that is either red wheaten or light wheaten.

The Rhodesian Ridgeback has a strip of fur that runs down their spine which lays in the opposite direction of the rest of their fur which is where their name is derived from.

The Rhodesian Ridgeback is an incredibly powerful dog and very capable of participating in athletic dog sports such as agility. It is great if you can give this dog a ‘job’ even if that job is long walks every day.

Because of their heavy working background this breed needs to be started with training at a young age. The Ridgeback is a very smart dog that can take to obedience training very quickly if they are trained with consistency and patience.

The earliest known history and documented origin of the Rhodesian Ridgeback says that the breed was derived in ancient Ethiopia or the Southern Sudan. The breed is said to have descended from native ridged dogs and crossed with various continental breeds. They combined Danes, Mastiffs, Greyhounds, Bloodhounds, Terriers, and other breeds with the half-wild Hottentot hunting breed to create the Rhodesian Ridgeback.

Its long history dates back to the early 16th century when European settlers found a domesticated dog with the Hottentot tribe. The Rhodesian Ridgeback was bred by the Boer farmers to fill their specific need for a serviceable hunting dog in the wilds.

In November 1955, the American Kennel Club admitted the Rhodesian Ridgeback to its Stud Book as the 112th breed to be registered with the Club.

The Rhodesian Ridgeback is a large, handsome, muscular dog. Its name describes its most unique characteristic, a clearly defined symmetrical ridge running the length of its spine, formed by hair that grows in the opposite direction from the rest of its coat.

The Ridgeback is a strong, active dog that is balanced in outline. A mature Ridgeback is an upstanding and athletic dog, capable of great endurance and a good amount of speed.

The dog has a broad head with high-set ears and a long muzzle. The short, sleek coat varies in color from light to red wheat. The adult Ridgeback weighs from 32 to 36.5 kg (70 to 80 lb) with an average height of about 66 cm (about 26 in) at the withers. Its ears are large and soft and hang down. The tail is long and balances out the height of the dog. Their eyes are expressive and keenly aware of slight movements both near and far.

The Rhodesian Ridgeback has the advantage of having keen sight, and a good nose for scent. Due to the wide-open terrain of the south African plains, and the skittishness of the game the Ridgeback was developed as a silent trailer, characteristic of its sight hound ancestry.

With the breeds natural dignified temperament, the Ridgeback is devoted and affectionate to his master but reserved with strangers. While able to enjoy lazing around in a patch of sun, or in front of a winter fireplace, a Ridgeback can become instantly alert and defensive if a stranger should appear.

The breed is good-natured but some individual animals do not do well with small children because they may play too roughly and knock them down.

This breed requires positive, reward-based training, good socialization and consistency; it is not the best choice for inexperienced dog owners. Ridgebacks are strong-willed, intelligent, and many seem to have a penchant for mischief. They are protective of their owners and families. If trained well, they can be excellent guard dogs.

Rhodesian Ridgebacks build up a level of stress and energy everyday which can determine how they interact with you, your kids and other dogs. Exercise releases stress and energy. Your dog needs exercise every day for this release. A bored dog can become a “bad dog”, whereas an exercised dog leads to a calm, well- behaved dog. Remember, an exhausted dog is too tired to get into trouble.