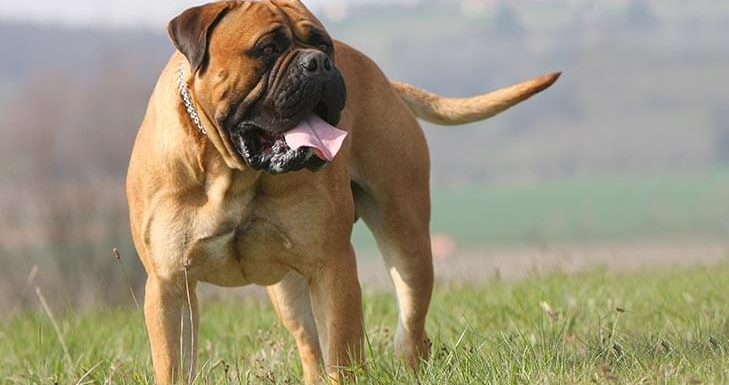 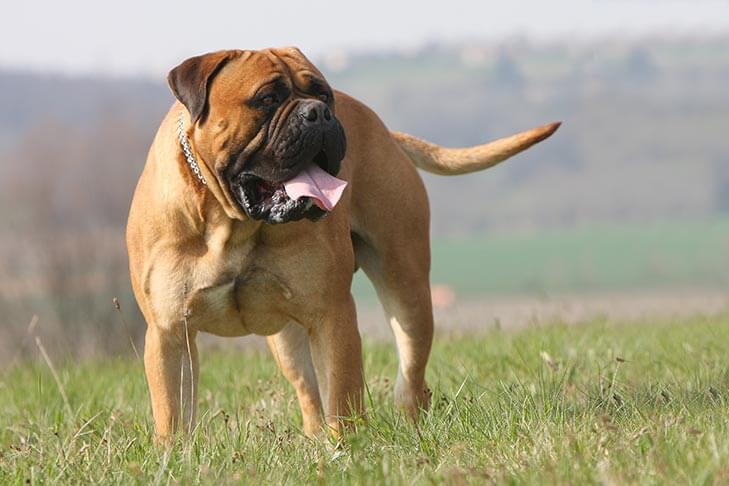 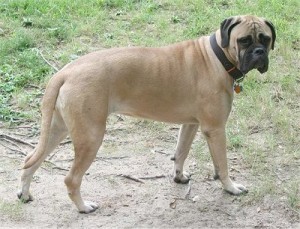 The Bullmastiff is an intimidating dog breed from Great Britain. This breed was bred as a protector and guard. It was developed by crossing a Mastiff and a Bulldog. This combination gave the Bullmastiff strength, size, a heightened sense of smell, and aggressiveness.

While this dog breed may be threatening and intimidating to intruders and strangers, they can also be a very loving and loyal family dog. If you plan on introducing a Bullmastiff to your family you need to make sure that you train it properly and take precautions to prevent food aggression and territoriality. They generally are better suited in single pet households, however, with training and proper socialization they can get along with other dogs.

The Bullmastiff is a giant breed of dog that was first bred in England in the nineteenth century for capturing poachers. Bullmastiffs would use their powerful size to force the poacher to the ground. The Bullmastiff is a cross between the Bulldog and English Mastiff and features a short muzzle and a short coat. In 1924 the breed was standardized and was officially recognized in England.

They are classified as a Working Dog. The English Bulldog from which the Bullmastiff is bred from is quite different from today’s modern version. The English Bulldog of the 19th century was a more athletic dog than many of today’s dogs, although the loyal and calm temperaments have remained the same.

Even with its massive and powerful build it is not cumbersome or awkward. Their backs are short, straight, and level between the withers and loin. Their large heads are broad and wrinkled and feature a comparatively short, square-shaped, dark muzzle that is about 1/3 of the length of their head. Their nose is black with large, open nostrils, and their eyes are medium-sized and dark hazel in color.

A Bullmastiff should be confident, yet docile. A Bullmastiff is courageous, extremely loyal to its family, calm, and loving. Bullmastiffs become intensely attached to their families. It is a devoted, alert guard dog, with a good-natured temperament. Tame unless provoked, it is fearless and protective, yet affectionate. Although unlikely to attack, it will catch an intruder, knock him down and hold him. At the same time, it is tolerant of children.

Great guard dogs but they do not bark much, as silence was a virtue when guarding estates. Bullmastiffs are independent thinkers and may not respond to traditional obedience training

Bullmastiffs have a tendency to become lazy, so frequent exercise is still needed to maintain a healthy lifestyle. This breed should not be overfed. Bullmastiffs can live happily in a small household or apartment if they are given sufficient exercise. They are comparatively inactive indoors, and a small yard will do. Bullmastiffs cannot tolerate extreme hot or cold climates.

Since the Bullmastiff is not a high-energy dog, every day walks should take care of required exercise. But play sessions, trips to exciting places and other highlights should be incorporated as they will otherwise tend to get bored. But until at least 12 months old possibly 18 months, exercise and walks should be on the dogs say so.

Your dogs should be tired when they get home, not half way round. Be careful not to over exercise a youngster, as he or she will not complain but chances are he or she will suffer in later life.

The breed has a short-haired coat that is easy to groom and care for. This breed’s coat should be brushed with a firm bristle brush and shampooed only as necessary. Bullmastiffs shed little to no hair. The feet should be regularly checked and their nails should be kept trimmed.