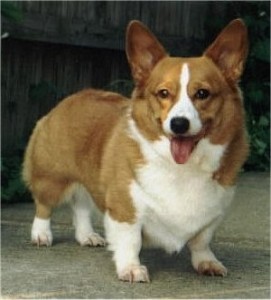 The Welsh Corgi (Cardigan), also called the Cardigan, the CWC, and the Cardi, is a herding dog that originated in Wales. They have a very distinct look and are a short and long dog that stands between 10.5 and 12.5 inches tall and weigh between 25 and 38 pounds. The males tend to be slightly larger than the females. This breed usually is found in shades of sable, brindle, and red. These dogs are known for the agility, intelligence, and affection.

They were bred to move around livestock. Their distinct look of short legs was specifically bred into the breed to avoid kicks from large farm animals. They are able to move around deftly amongst large stock animals and avoid injury from a stray hoof or foot.

This breed is very smart and trainable and should be started with their obedience training at a young age. Today this dog can be found competing in agility and obedience and is a wonderful all around friend and companion.

Be firm but fair and you will have success in training your Corgi.

The Welsh Corgi (Pembroke), also called the Pembroker, the PWC, and the Corgi, is a Welsh herding dog. Like their cousin the Cardi, they are a long and low stature dog. They stand between 10 and 12 inches tall and generally weigh less than 30 pounds. The females of this breed tend to be slightly smaller than the males. This is generally a healthy breed, however, their body structure makes them prone to developing arthritis early.

Origin of the Corgi

The Pembroke Corgi is a considerably old breed. They are the direct descendants of dogs that were brought across the Channel in 1107 by Flemish weavers. Their ancestors are said to have had a resemblance to the old Schipperkes.

The Pembroke Corgi is related to many breeds including the Keeshond, Pomeranian, Samoyed, Chow, Norwegian elk hound and Finnish Spitz.

The Pembroke Corgi is a separate breed from the Cardigan Corgi, possessing a shorter body and straighter, lighter boned legs.

The Pembroke Welsh Corgi is a low-set, strong and sturdily built breed of dog. It gives an impression of substance in a small space.

It has a broad flat skull and a fox-like head. Its ears stands erect and pointed at the tip. This breed has a very short tail.

The Pembroke Welsh Corgi’s coat is medium in length. They have weather resistant undercoats with a coarser, longer outer coast. The coat can be red, sable, and fawn, black and tan with or without white markings.

Although small dogs, they have great abilities. They are avid competitors in many dog sports, including conformation, herding and obedience. They have free and smooth gaits and as herding dogs, they have agility, freedom of movement, and endurance to do the work for which they were developed.

Temperament and Tendencies of the Corgi


Among small house dogs, the Pembroke Welsh Corgi is one of the most agreeable breed. It is bold and friendly. It is very responsive, easy to train, and loves its family so much. It is highly adaptable and can do well in any living condition. However, probably the best environment for them is a farm.

They have intelligent expressions. It is a breed that always gives interest in to learning things. They are never shy or violent. They are active, outgoing, restless and excitable. This breed tends to bark a lot but can be trained not to bark excessively

Their herding instincts are very strong and when young and untrained, they might try to herd people by nipping at the heels. They make excellent guard dogs because they are very wary and somewhat suspicious to strangers. Very courageous, they will protect their homes at the cost of their lives.

The Pembroke Welsh Corgi should be properly socialized and it should be started early in its life. Their overly protective tendencies will lessen to manageable scales if socialization is extensive and constant.

A determined, consistent, firm but loving approach in human leadership is what the breed need most. Calm management will help control their over-protective tendencies. They may develop human induced behavioral problem, such as “Small Dog Syndrome”. As an owner, you must try to avoid this or they will become too stubborn and dominant to manage. They may also become too aggressive and unsafe with children.

Regular exercise is required for this breed. The Pembroke Welsh Corgi will do fine in an apartment if they are sufficiently exercised. This breed is very active indoors and will do okay without a yard and in most climates.

This breed requires routine brushing of their coats. Comb and brush with a firm bristle brush, and bathe only when necessary. The coat sheds twice yearly.