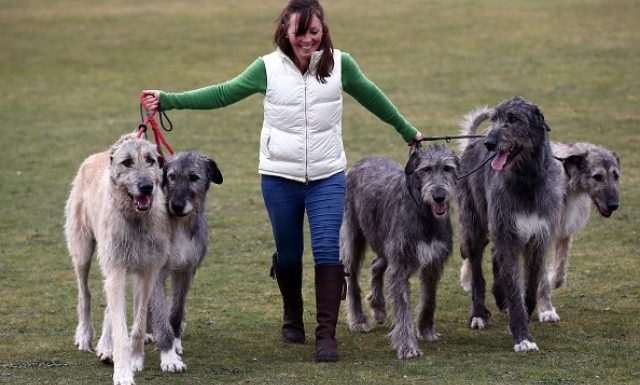 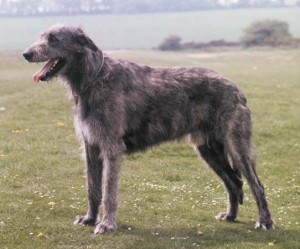 The Irish Wolfhound is a huge dog that creates an instant impression. This is an ancient Irish breed that was used to hunt wolves and used in battles to pull men off or horseback. Today the Irish Wolfhound is still used for hunting, however, they have also transitioned to a family dog.

Despite its intimidating appearance, the Irish Wolfhound is actually a loving and gentle breed. They are great with kids and with other pets. As one of the largest dog breeds in the world they stand between 28 and 36 inches tall and weigh between 90 and 120 pounds. Their coat is rough and scraggly and they usually come in shades of gray, red, white, fawn, brindle, and black.

The origin of the Irish Wolfhound is shrouded in myth and legend. This is an ancient breed possibly dating back as far as the 1st century BC. This breed can often be found in literature and artwork that predates Christianity and one of the most primitive recorded references to Irish Wolfhounds is in Roman records dating to 391 A.D.

Back in the early times, this breed dogs was called “cu” meaning “Irish hound” or “wolf dog”. Royalty or nobility are the only ones who owned them and often used as royal gifts.

Irish wolfhounds are versatile dogs. They hunted with their masters, fought beside them in battle, guarded their properties, played with their children, and lay quietly by the fire as comfortable companions.

Appearance and Abilities of the Irish Wolfhound


The Irish Wolfhound has great size and a commanding appearance. It has a large, muscular greyhound-like shape, and the breed is very tall, but compactly built. The male dog is at least 32 inches (81 cm) tall and weighs a minimum of 120 pounds (54 kg) while the female, which is smaller, stands a minimum of 30 inches (76 cm) and weighs a minimum of 105 pounds (48 kg). It is remarkable in combining power and swiftness with keen sight.

In general, they are rough-coated, very muscular, and strong though gracefully built; and their movements are easy and vigorous. Their heads and necks are carried high and the tail is carried with an upward sweep with a slight curve towards the extremity. The Irish Wolfhound’s coat is rough and particularly long on the brows and under the jaw. Coats come in colors that include gray, brindle, red-brown, black, and white.

A keen-sighted hound the breed was used in Ireland for many years to hunt wolves and other game.

Temperament and Tendencies of the Irish Wolfhound


Irish Wolfhounds are good-natured, tolerant, generous, thoughtful and very intelligent. Although now primarily a family companion, the breed will still instinctively give chase to fleeing prey because of its high prey drive.

Dignified and willing, they are unconditionally loyal to their owners and family. They do not have great guarding instincts but their sheer size will often scare off strangers. Big as they are, they are rather friendly and amiable.

An Irish Wolfhound puppy up to six months of age should just be allowed to play and should be given no actual formal exercise, except for training. A puppy is never too young to learn. It is important to take a growing pup for daily walks for their mental well being. However, too vigorous exercises should not be forced and may be too taxing for this dog’s young body.

The breed’s large size commands more room, more exercise, and a bigger car. Therefore, the Irish Wolfhound is not recommended for apartment life. It is relatively inactive indoors but will do best with no less than a large yard.