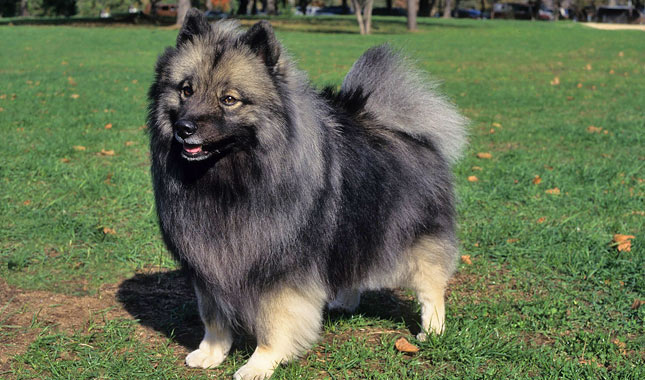 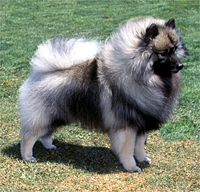 The Keeshond, also referred to as the Wolf Spitz, is a non-sporting breed that originated in the Netherlands. They were usually used as a sledding dog in the Artic. Today this breed is used as a vermin hunter, a guard dog, and as a family dog.

The Keeshond usually stands between 17 and 19 inches tall and weighs between 35 and 40 pounds. They have a long, straight, fluffy coat that is variegated with shades of cream, black, and gray. This breed is great with kids and other pets. To keep this dog happy and healthy you will need to groom it daily, check its coat for ticks frequently, and exercise it on a daily basis.

Origin of the Keeshond


The Keeshond is a descendant of the same arctic strain where breeds like the Samoyed, Chow Chow, Norwegian Elkhound, Finnish Spitz and Pomeranian also came from. It is originally used as watchdog.

Keeshonds were popular in Holland back then. The name came from Kees de Gyselaer, the leader of the Dutch Patriot political party. Kees de Gyselaer owned the breed and it became a symbol of its party. The breed then suffered a long period of neglect. It was revived a century later by Mrs. Wingfield-Digby was the first to introduce the Keeshond to England and did not become popular again until 1920.

The Keeshond is medium-sized dog. It resembles a Pomeranian only significantly larger. It was even dubbed as an “overweight Pomeranian”. It has a fox-like intelligent expression.

It is a very attractive dog, well-balanced with a short-coupled body. The Keeshond has a stand-off coat and a richly plumed tail that is well curled over the back. The coat is very thick and ruffled around the neck. Its rump and hind legs, down to the hocks, are also thickly coated.

Keeshond coat color come in a mixture of gray, black and cream. The shade may differ from light to dark as the hair of the outer coat is black tipped, the length of the black tips produce the characteristic shading of color. Puppies are often less intensely marked. The undercoat is very pale gray or cream, never tawny

Temperament and Tendencies of the Keeshond


Keeshonds are very alert creatures. They are playful and lively, perfect companions for kids. They are affectionate and loving to their masters. Outgoing and friendly, Keeshonds are full of personality.

Keeshonds like to get involved in family activities. Their friendly nature helps them mix well with other pets. Their history had made them develop great guarding and working instincts. However, nowadays, Keeshonds are also considered great companions.

As guard dogs, they like to bark and will promptly give warning to announce that something was out of order. Their inclination to bark too much may become a problem if not addressed accordingly.

Always be your dogs pack leader; remaining firm, confident and consistent. Give the dog rules to follow and limits to what it is and is not allowed to do. Dogs crave, and instinctively need this type of order in their lives.

Exercise is very important to Keeshonds. They need to burn all their excess energy to remain manageable inside the house. Over excitability, such as spinning in circles and other behavior issues are a sign of a dog lacking in physical and mental exercise.

Socialization is essentially required for Keeshonds proper development. Socialize well to avoid them from becoming reserved or timid.

Keeshonds are just fine with apartment living. However, a home with a fenced yard is perfect for the breed. They sometimes seek some space to run and play around. Daily walks and training outside will offset this breeds desires for activity.

Despite their dense and beautiful looking coats, grooming is not as troublesome as you might expect. Daily brushing of the long coat with a stiff bristle brush is adequate. Bathe or dry shampoo only when necessary. The dense undercoat is shed heavily twice a year in spring and fall.