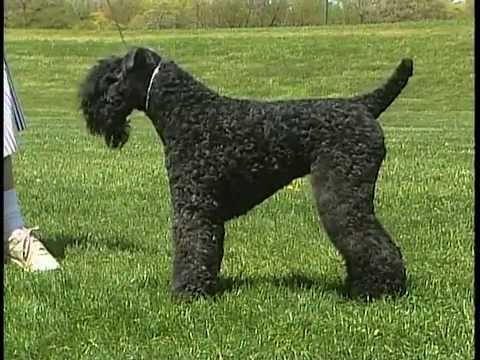 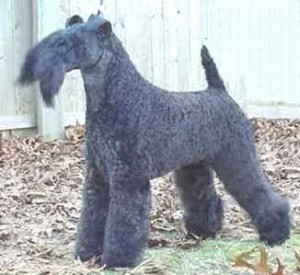 The Kerry Blue Terrier, also called the Irish Blue Terrier, is an Irish breed that was created in the 18th century. It was originally used as a herding dog, vermin catcher, and waterfowl retriever. Today this breed is used as a guard dog and as a pet.

The Kerry Blue Terrier usually stands between 18 and 19 inches tall and weighs between 33 and 37 pounds. Their coat is soft and wavy and comes in shades of blue with black points, blue without black points, and small white patches on their chest is also common. The Kerry Blue Terrier is great with kids. They are happiest when kept as the only pet, as they may show male dog aggression. It you have a cat then you will need to socialize your Kerry from a young age with the cats, otherwise you could have trouble.

History and Origin of the Kerry Blue Terrier


The Kerry blue terrier, also known as the Irish blue terrier, originated in the 1700’s in the mountainous regions of County Kerry from which its name is derived. It was primarily developed for controlling “vermin” including rats, rabbits, badgers, foxes, otters and hares. However, over time the Kerry became a general working dog used for a variety of jobs, including herding cattle and sheep and as a guard dog.

The breed’s two Irish cousins are the Irish terrier and the Soft-Coated Wheaten Terrier; the latter is often considered an ancestor of the Kerry Blue.

The dog has become a symbol of Ireland. In 1922, the United States Kerry Blue Terrier Club was founded. The breed was recognized by the AKC in 1924.

The Kerry blue terrier is medium-sized, athletic, and agile. It is upstanding, well knit and proportioned, well developed and muscular body showing good balance. Its head is long but still proportioned to the body. The nose is black with wide nostrils. The ears are V-shaped and small but in proportion with the dog’s size.

The coat is the key feature of the Kerry. It is soft and wavy with no undercoat. Born black at birth the silky, unusually dense and wavy coat changes very dark blue (darker than deep slate) shades or tinges of brown to different shades of blue gray.

The Kerry blue terrier is truly an all-purpose dog.

Temperament and Tendencies of the Kerry Blue Terrier


Like all terriers, the Kerry blue terrier has a dynamic terrier temperament. Most terrier breeds are remarkably similar. The same words are used over and over — quick to bark, quick to chase, lively, bossy, feisty, scrappy, clever, independent, stubborn, persistent, impulsive, and intense. It is a compact and powerful, yet graceful terrier; displays an attitude of alert determination and definite terrier style and character throughout.

The breed is highly intelligent. The Kerry blue terrier is vivacious and playful, determined, alert, and boisterous. This breed has a way about it that makes people laugh and have fun.

This breed is protective and should be extensively socialized, especially with other dogs, or it may be quite a handful. It is best trained at an early age and can be taught key obedience skills in a matter of a few weeks. The Kerry blue terrier is a natural problem solver and can become very independent quickly.

Use motivational, positive reinforcement training – the Kerry stubborn streak and intelligence will respond best to training if it is made to be “worth her while” and the instinctive desire to please is appealed to.

Owners need to be consistent with the rules and more determined than the dog. However, if their lessons are too routine the Kerry blue terrier may lose interest. Kerry Blue Terriers are active go-getters. They must have regular opportunities to vent their energy and to use their busy minds to do interesting things. They are good for apartment life. They are fairly active indoors and a small yard will do.