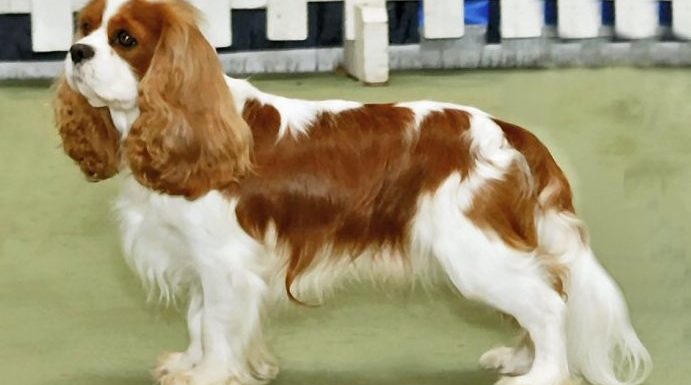 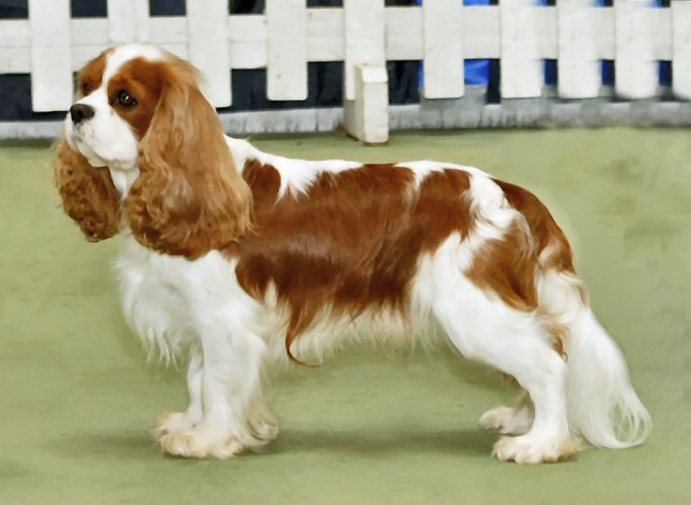 To care for this breed you will need to brush their coat weekly. Like most breeds with long floppy ears you will need to check their ears regularly and make sure that they stay clean. This breed doesn’t require a lot of exercise. You can keep them healthy by simply playing with them in the backyard or by taking them for a walk around the block once a day. Some of the health issues that you will need to keep your eyes open for include heart murmurs, patella luxation, ear infections, and eye conditions

There has been much speculation about the origin of the Cavalier King Charles Spaniel as we know it today. This breed is widely believed to be the direct descendant of the small Toy Spaniels seen in so many of the pictures of the 16th, 17th and 18th centuries.

It is possible that the Cavalier developed from a red and white spaniel indigenous to Malta or Italy, which was crossed with a spaniel type from the Far East in the 13th century.

The royal name, ‘King Charles Spaniel’ was bestowed during the reign of King Charles II, who was so fond of his spaniels he could not be parted from them.

The Cavalier King Charles Spaniel has expressive, large, dark round eyes set in a slightly rounded head. This member of the Toy Group, although built along the lines of a small gun dog, this breed is the smallest spaniel.

It has a height of 12 to 13 inches at the withers; its weight proportionate to height, between 13 and 18 pounds. A small, well balanced dog within these weights is desirable, but these are ideal heights and weights and slight variations are permissible.

The Cavalier King Charles Spaniel coat is long and silky and very soft to the touch; free from curl, though a slight wave is permissible. Feathering on ears, legs and tail should be long, and the feathering on the feet is a feature of the breed.

The Cavalier King Charles Spaniel is a delightfully affectionate, playful, intelligent little dog that repays his owner’s care and attention with an endearing devotion and a wagging tail. The Cavalier is very happy, active and fearless despite its diminutive size. It is very loving to its family and a good companion for both children and seniors.

This is an active, graceful, well-balanced breed of spaniel, very gay and free in action; fearless and sporting in character, yet at the same time gentle and friendly.

They are said to be naturally well behaved and get along well with other dogs and non-canine pets. Cavaliers love their family so much and enjoy companionship.

It often takes longer for the Cavalier King Charles Spaniel puppy to be housebroken than for most other small breeds. The breed needs time and maturity to get the muscle control in order to perform where they should.

These fearless lively little dogs want to please. They are intelligent enough to understand what you want and therefore are usually easy to train and respond well to gentle obedience training.

The breed is adaptable in their need for exercise, happy with either sleeping on the couch or taking long walks.

The Cavalier does require regular grooming. A great deal of time and effort is not necessary if the dog is brushed and combed thoroughly at least once a week. Cavaliers do shed, particularly in spring and fall.