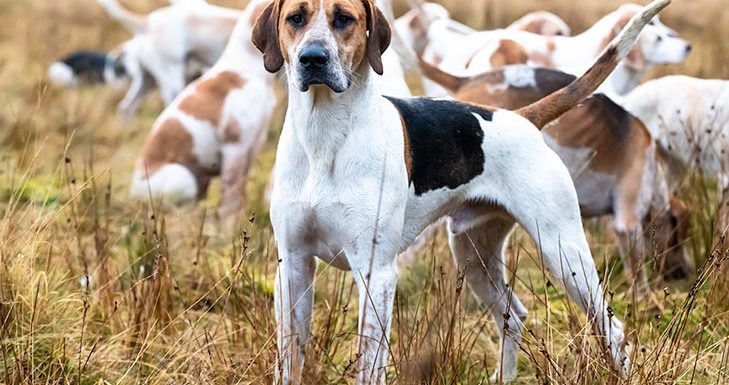 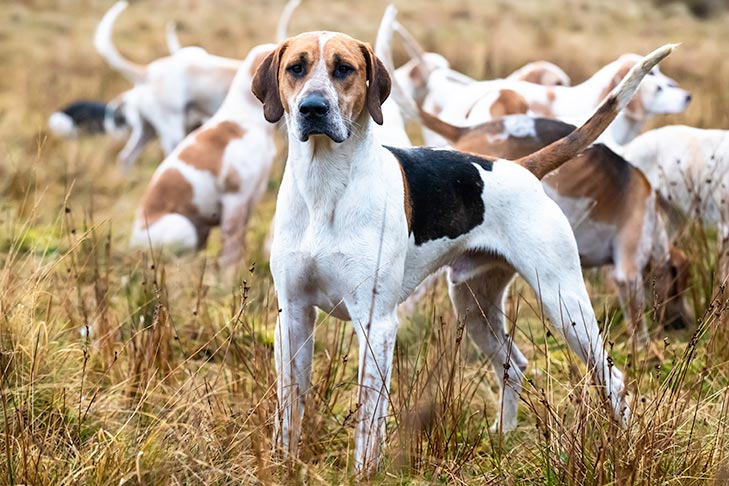 Want to learn how to transform your Foxhound’s behavior? Click here to find out how.

The American Foxhound is an American breed that is descended from the English Foxhound. The American version of the Foxhound has traditionally been used to hunt predators like coyotes and foxes, however, they have also been used for hunting deer. Today this breed is used as a hunting dog and as a family pet.

This is a medium sized dog that stands between 21 and 25 inches tall and weighs between 65 and 75 pounds. It has a short coat that is hard. This breed can be found in just about any color. This dog has a very friendly personality that makes it a great family pet and companion.

The English Foxhound is a British hunting dog that can be traced back to at least the 16th century. They were originally bred to hunt in packs. This breed was the result of mixing several hounds including the greyhound, with a bulldog and a fox terrier. Today these dogs are still used for fox hunting, however they also are used for family pets.

The English Foxhound stands between 23 and 27 inches tall and they weigh between 55 and 75 pounds. Their hair is short and hard, like the American Foxhound, and their coat comes in black, white, tan, bicolor and tricolor coats. In order to train this dog you need to be firm and consistent. They are a smart dog, however, they get distracted easily by fresh scents.

The thoroughbred hunting dog, accompanying the Red Coats on horseback or America’s first president, could only be the Foxhound, a distinctive, regal breed of scent hound derived from the old breeds of France.

Foxhounds have two distinct varieties; the American and the English. American Foxhounds are lighter and taller than their English relatives. They have a large build and handsome facial features. Their limbs are lanky, long, and straight-boned, and they are extremely agile and fast. On the other hand, the English breed has a heavier build. But both are noted for their endurance and have been trained to hunt foxes and other game

The history of the English foxhound is well documented. In fact, pedigrees of this breed have been kept longer than any other breed, since the late 1700s. However, the precise origin of this dog is still somewhat of a mystery. It is believed that at the beginning, around 1750, the English foxhound was developed by men who envisioned a dog that could track the faint scent of a fox while the dog was on the run and maintain that chase for an indeterminable amount of time.

The American Foxhound dates back to the early 1700’s in Virginia and Maryland. It is an ideal choice for those who live in rural areas or on farms. George Washington is the father of the American Foxhound, he ran a breeding program and often referenced his hounds in his journals.

Foxhounds somewhat resemble large beagles. These lovely dogs are friendly, kind, outgoing and courageous in the field. Considered to be a bold and passionate hunter, the English foxhound is a very active dog that does best with other dogs.

Foxhounds are bred to run. If you can provide your hound with adequate exercise, apartment living is fine but rather tricky. If not, you’re hound is likely to become bored and destructive. Exercise the dog regularly. Bred for hunting, Foxhounds have nearly limitless energy and need to be exercised often. A simple walk through the park will not be enough for your Foxhound; it will need to run far and fast on a regular basis.

They make considerable noise when baying. Like all hounds, the Foxhound is musical. Hounds are described as having bell-like voices, and their baying can carry for miles. It’s best not to bring one home unless you’re sure your neighbors will appreciate the concert or live far enough away that they won’t be disturbed.

They are well suited to living in the country and outdoors in kennels with a pack. The Foxhound is an easygoing dog that needs plenty of exercise. If you are lazy, the Foxhound is not the dog for you.

There are accounts that they are difficult to housebreak but with consistent house training they can eventually adapt.

They are very affable dogs, however if a particular dog is allowed to see itself as a pack leader above humans, it may become over protective and mistrustful of strangers.

The smooth, short-haired coat is easy to groom. Comb and brush with a firm bristle brush, and shampoo only when necessary. This breed is an average shedder.

Want to learn how to transform your Foxhound’s behavior? Click here to find out how.