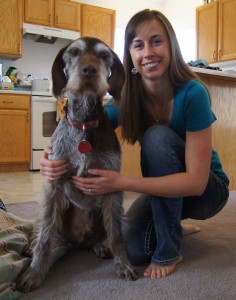 Meet Kae and Willy. Willy is a pointer clocking in somewhere around eight years old. Kae and her husband like to rescue dogs when they’re a bit older as they feel that a lot of these dogs don’t get a good chance at rescue.

Willy is an amazing dog. He’s about as sweet as they come. He’s mild mannered, friendly with everyone dog and human-alike. When Kae and her husband are home he likes to just chill around the house. He’s mostly deaf so he hasn’t really been able to respond to his name but he there are so many great things about him.

If Willy was left alone in the bathroom or the basement he would howl and bark all day, he would defecate all over the place, and he was destructive. His family opted to use a crate to keep him safe while they were gone and about nine times out of ten they’d come home to a dog and crate covered in feces and a dog who was stressed and panting heavily. In other words, he was a wreck when left alone.

Now, if you’ve ever experienced problems with your dog when you’re gone you know they can be a challenge. In a lot of cases with dogs that are house training or destructive we can simply use a crate and the dog won’t go to the bathroom and can’t be destructive. But what about dogs who ARE crated but freak out and defecate and bark loudly?  That’s where Willy was when I met him.  His owners hadn’t had him for too long before they called us in because they simply couldn’t take coming home to bathe a dog and wash a crate any more.  They were committed to him, though.  And committed to finding the solution.

The solution I offered was one that was unorthodox as it relates to the dog training world.  In fact, there is a large subset of dog trainers who, if asked about the methods I taught, would vehemently deny that they could ever work and would denounce them as cruel.  I’ll show you in a bit, though, how they are wrong about that.

Let me first tell you, however, about the non-controversial aspect of what I recommended.

1- I recommended the ‘crate game’. This is simply entering into the crate for a treat, coming back out, going back in, etc.  I do this with a lot of dogs to ‘take away the sharpness’ of the crate and create a fun association with going in.  For a lot of dogs the buildup to being left alone intensifies and is attached to certain behaviors such as putting on shoes, grabbing keys, and then going in the crate.  Each one of these small rituals intensifies the stress.  So not only did I have them play this crate game to bleed off that stress from going in the crate but I also recommended they do their ‘exit triggers’ (keys, shoes, jacket, etc.) several times a day to soften the blow of the times they actually did leave.

2- We fixed his leash walking. He was a bit of a puller. A dog who pulls on a leash may be exercising his body but isn’t exercising his brain very much.  By teaching what I call ‘focused walking’ we get the dog’s brain working while on the work.  This level of mental work has a soothing and calming effect.  It also has one of the biggest, what I call, ‘collateral effects’ of any training behavior.  What I mean by that is there are so many behaviors that are collaterally effected when the dog does nice focused walking every day.

3- We taught him a good ‘stay’ behavior. Lots of dogs that have separation anxiety can be clingy around the house.  They are too dependent on their owners.  By teaching the dog to hold a ‘down-stay’ 10-20 feet away from the owners while the owners eat, watch television, etc. we can create and encourage even small amounts of independence that can then lead to a greater ability to control oneself when the owners are gone.

Up to this point there isn’t a lot of controversy.  Plenty of trainers from all different walks of life and philosophies would likely do similar things.  It’s the next step that will get me a lot of flak.  And I don’t care.

For the next step I needed to address what I call the ‘stress snowball’.  You see, with a lot of different types of stress behaviors (aggression, anxiety, fear, etc.) there is what I call a snowball.

With a dog with aggression the aggression snowball starts when the dog sees something that makes her nervous, she puffs her chest up, her fur goes up, then she’s barking, then she’s lunging.  This may take a split second or it may take a half minute.  But the snowball gets increasingly bigger and harder to divert the longer the dog mentally stays in this frame of mind.

Many years ago, when I was seeing more and more snowballs occur, I naturally assumed ‘what happens if the snowball is stopped before it rolls down the hill?’

In experimenting with this thought process we came up with some really amazing ways to solve aggression in dogs.

As it relates to separation anxiety, we see a lot less of that than we do dogs with aggressive problems.  But we see enough that in experimenting with this years ago I came across a principle that has proven true each time I’ve employed it:

In cases of separation anxiety; if you take away the dog’s ability to manifest stress then the stress itself will go away.

What we’ve seen time and time again is that when we remove the option to bark the dog is still left stressed, of course.  He’s still alone, after all, which is why he was freaking out.  But absent the ability to bark the only alternative is to adapt.  And adaptation always seems to take the form of lying down, relaxing, and perhaps taking a nap.

So that’s what we did.  No, we didn’t debark the poor fella.  We used electric training collars.

This is the part where certain trainers and dog folks will scream bloody murder.

‘How can you do this!’ they’ll scream. ‘He’s already stressed out.  Do you think SHOCKING him is going to make it better??!!  Of course not!  It will only make him worse!’

I’ve been called some pretty awful names over the years due to my training style and for this style of training I’ve received some particularly strong hate mail.  But I don’t care.  Do you know why?  Because I care about the dogs and their people.  Let me expound further:

In Willy’s case during our first training appointment we put him in the crate, walked away, and sure enough he began his diatribe of ‘woe is me!’  But this time it was different.  This time we had the electric collar on him and it was set very low.  I mean, low enough that about half of those who feel it aren’t able to feel it at all.  As he would start to whine I’d tap on the button.  Bear in mind, the level was so low it didn’t act as a correction.  Instead it was more of a ‘pattern interrupt’ that distracted him and got him to temporarily stop vocalizing.  He would, of course, start up again at which point I’d start again at which point he’d stop.

We never had to use a strong correction at all.  We were able to get him to stop barking during that session using very low level stimulation.  At that point, though, it was all theoretical until it was put into practice.

Over the next few weeks it was up to Kae and her husband to test this out.  And they did a great job.  They were consistent with the methods and stayed on top of the training.  So what was the result?

He’s done pooping in his crate!  They report he’s only done it once over the past three week period and that was the time that the bark collar was on a little bit loose.  Not only is he not pooping in his crate, or barking, but they come home to find him relaxed and sleeping rather than frantic and stressed.

In other words, we took away his ability to manifest stress and, as a result, the stress went away as well.  Don’t get me wrong, this is all new.  If they didn’t use the collar tomorrow he’d probably test his ability to bark and would go right back to crate pooping.  But over time I imagine they’ll find that the collar becomes less and less necessary.  As it stands, he’s not even barking or being corrected now.  Essentially it means that with a handful of corrections from the collar he’s now able to lead a so much happier life and so are his people.

Now why is this significant?  It’s simple.  It’s significant because so many trainers will tell you this is impossible.  If you do a google search right now about electric collars you’ll find horror story after horror story on the damage they can do.  Do you know what?  Most of those stories are true!

Used improperly the electric collar is an awful tool that can hurt dogs and hurt relationships.  Used properly, however, it’s a communication device that provides greater flexibility in communicating with your dog at a distance.  Heck, we even taught this deaf dog to come when called by using the vibration feature on the collar.  His life got better all around.

Unfortunately, many trainers are getting that wish.  Were it not for his great owners Willy would have been the kind of dog that someone else would have put to sleep or gotten rid of.  Instead they were committed and open minded.  Now, three weeks later, he’ll be able to live in calm harmony with his owners until the rest of his days.  Can you fix problem behavior with electric collars and improve your dog’s and your quality of life?  Done right…absolutely.